Sales and use tax auditors routinely ask for income tax returns as part of their initial records requests. If a taxpayer or CPA is reluctant to provide the returns, the Board of Equalization simply orders copies from the Franchise Tax Board or IRS. Why the interest in a taxpayer’s income tax returns? 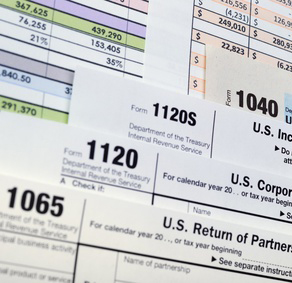 One of the first things tax auditors look for is consistent recording and reporting. Examiners get worried when sales reported to the BOE don’t tie to sales recorded in the general ledger. They get even more worried if sales on the income tax returns don’t match either one. Consequently, auditors look at sales on income tax returns to ensure that everything matches or any differences can be explained (BOE Audit Manual, Sec. 0406.50). If the differences can’t be accounted for, the auditor will assume that the largest available numbers are the most accurate ones.

Besides reconciling total sales, most auditors review income tax returns as a whole. Do sales, inventory figures, costs of sales and expenses bear reasonable relationships to one another? Are the numbers in line with those noted in similarly situated businesses? Do the returns show reasonable net profits from year to year? If the auditor is working with individuals, do they have other sources of income and is their total income consistent with their lifestyle? Any “no” answer triggers a deeper investigation.

“One of the first things tax auditors look for is consistent recording and reporting.”

If the taxpayer has claimed a sales tax deduction for bad debts, the auditor is required to determine whether the same accounts were written off for income tax purposes. Many bad debts allowable as an income tax deduction have components that are not deductible for sales tax purposes. In such cases, the auditor must reconcile the differences. This generally occurs when the original sale was partly exempt, as in the case of an automobile repair that included both parts and labor.

For any business making retail sales, the costs of sales on its income tax returns can quickly assume major importance in an audit, particularly for businesses whose records have been lost or destroyed, or where the records are unclear or incomplete. The reason is the BOE’s widespread use of markup auditing. 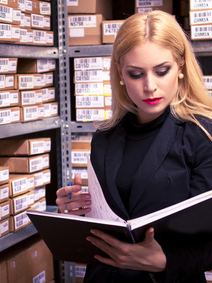 According to the BOE’s Audit Manual, Sec. 0407.10, “Mark-up procedures to determine audited sales (i.e. gross sales, sales of a deduction or taxable sales) are a vital part of sales tax auditing. The auditor should expand on this use whenever the opportunity presents itself… A mark-up test and/or procedure to determine sales is only as reliable as the base from which an auditor is working or in other words, purchases or if available, cost of goods sold….”

A clarification may be in order here. Most CPAs are familiar with gross margin percentages, such as gross profit expressed as a percentage of sales. When gross sales are $1 and the cost of sales is 75 cents, the gross margin is 25 percent. Markup, or mark-on, is gross profit expressed as a percentage of cost of sales. In the example, the markup is 25 cents divided by 75 cents, or 33.33 percent.

However, if the markup appears low, the auditor generally performs a shelf test, using the taxpayer’s actual costs (from purchase invoices) and selling prices (from sales invoices or shelf prices) to compute the actual markup. If the shelf test produces a higher markup than the one recorded, that higher markup will be applied to the taxpayer’s recorded costs of sales to compute “audited” sales.

Any significant difference between “audited” sales and reported sales will form the basis for a sales tax assessment.

In many cases, the “recorded” costs of sales used for these markup computations are taken from the taxpayer’s income tax returns rather than the general ledger. Auditors are more confident using income tax data because the figures have been reviewed by the taxpayer’s CPA and are more likely to reflect year-end adjustments.

Further, use of the general ledger often requires some compilation on the auditor’s part, whereas costs of sales on income tax returns are summarized in one place.

When an auditor marks up the cost of sales taken from an income tax return, the resultant sales figure can easily be overstated. As noted, the markup computed in a shelf test is based on actual costs and selling prices of individual items. Such costs usually exclude freight in, any supplies bought from merchandise vendors and similar expenses normally reflected in recorded purchases (the particular mix of items chosen for the shelf test also can distort the outcome, as can many factors relating to selling prices).

When a markup factor computed from individual product costs and selling prices is applied to costs of sales that include both product costs and other costs, the resulting “audited” sales figure will be overstated.

For example: A retailer under audit sells one item with a unit cost of $10 and a price of $15. The auditor has just completed a shelf test indicating the markup on the item is the $5 gross profit divided by the $10 cost, or 50 percent. During the year under audit, the retailer sold 10,000 units, resulting in sales of $150,000.

The cost of sales on the retailer’s income tax return was compiled from the “merchandise” column of the purchases journal. The purchases recorded in this column included amounts paid for products ($100,000), freight in for those products ($7,000) and various supplies sold by the same vendor ($9,000), for a total of $116,000.

When a sales tax audit results in additional “audited” total sales of $20,000 or more, the report is forwarded to the Franchise Tax Board, which then shares the information with the IRS (BOE’s Audit Manual, Sec. 0206.51). The taxpayer’s problems may be multiplied accordingly.

The lesson for CPAs is clear: Be aware of the composition of the costs of sales on your client’s income tax returns and closely examine the components of any markup assessment proposed by a sales tax auditor. 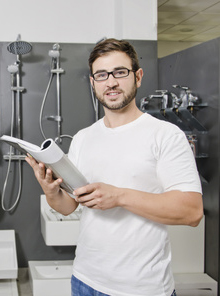 Costs of sales often become the most important variables in sales and use tax audits of construction contractors. That’s because they are the primary components of cost accountability tests, which are the most common procedures used to audit contractors. As with markup tests, the costs of sales used for this purpose are often taken from the taxpayer’s tax returns.

To understand cost accountability tests, you must understand how California’s sales and use tax law applies to construction contractors.

1. In California, as in most states, contractors are regarded as consumers of the materials they furnish and install.

2. However, California contractors are considered retailer of fixtures, which the state defines as items that do not lose their identity when incorporated into realty, such as plumbing or light fixtures.

3. The labor to install materials and fixtures is tax-exempt.

Cost accountability tests are used to determine whether the materials that the contractor incorporated into realty were reported correctly. The tests are applied to contractors who buy all or most of their materials without tax (i.e. under resale certificates or from out-of-state vendors), which includes most contractors who also install fixtures or sell materials over the counter. If an accountability test indicates that installed materials were under-reported, the results will be used to assess use tax on the understatement. 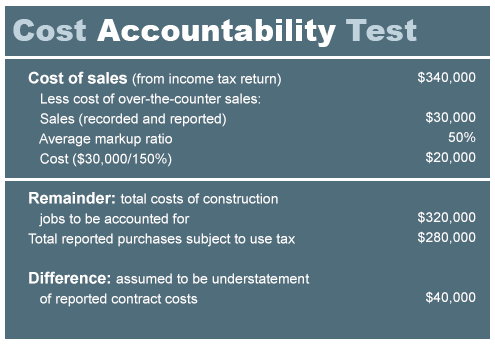 The example in Figure 1 illustrates how the test works. The cost of property sold at retail (such as materials sold without installation or fixtures in general), is removed from the cost of sales by applying one or more markup factors.

In this example, no fixtures were involved; materials generally were bought without sales tax; and the contractor’s policy was to report the costs of installed materials on his sales tax returns as purchases subject to use tax. All materials sold over the counter (not installed) were taxable at their retail selling prices, carried a 50 percent mark up, and were reported as sales rather than purchases.

Note that the costs of construction jobs to be accounted for are compared with the costs that were reported on the taxpayer’s sales and use tax returns as purchases subject to use tax. Recorded taxable sales would be separately compared to sales, not purchases, reported on the returns.

Without further analysis by the taxpayer or CPA, the indicated understatement of $40,000 would be assessed as taxable. However, the composition of the cost of sales figure from the income tax return deserves closer inspection. The amount may include various nontaxable components, such as subcontract labor, freight in and tax-paid supplies. Sales tax even may have been paid on purchases of some of the materials themselves. Any nontaxable or tax-paid components should be factored out and the test should be recomputed without them.

Sales tax auditors regularly use income tax returns to verify both sales and purchases subject to use tax reported to the BOE. They also may use income tax returns as the basis for assessments, particularly where smaller businesses or inadequate records are involved. If your clients are vulnerable to these procedures, you will be wise to keep the BOE’s practices in mind when preparing both income and sales tax returns.

Get Your Free Consultation

Our Mission is to be the Best at What we do!