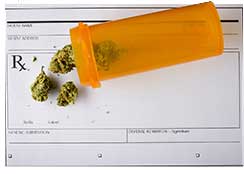 In the audit of any small business, tax auditors will generally seek to examine available books and records in order to verify that the recorded figures match the amounts reported on the sales and use tax returns. Once the auditor has performed this initial verification, they will generally seek to verify the accuracy of recorded figures through a secondary audit methodology. A secondary audit methodology involves using indirect information (something other than the books and records of the business) in order to calculate an estimate of sales and to verify existing records. For example, an auditor might compare the total bank deposits of a business to the recorded sales on a profit and loss statement or sales journal in order to verify that recorded figures are accurate. In regards to marijuana dispensaries, the audit staff is often unable to use common secondary audit methodologies, such as a bank deposit reconciliation. At least one reason is that marijuana dispensaries are not able to safely use federally insured banking institutions for business activity, because medical marijuana is not currently recognized by the federal government as being a legal medication. Thus, the government may freeze and/or confiscate the funds deposited into the account that were generated from the “illegal” activity. Even if bank statements are available, because dispensaries generate a high percentage of their gross receipts from cash, the audit staff may assert that the dispensary does not deposit all of its cash sales and that the bank deposits are therefore not an accurate reflection of sales. The burden is upon the dispensary to overcome any estimate established by the auditor.

Marijuana dispensaries are unique in that auditors will generally not be satisfied even when the most common secondary audit methodologies support reported sales figures. Because the auditor may not rely on common audit methodologies, the auditor will often resort to what is referred to as an observation test. As the name implies, an observation test consists of the auditor visually auditing the operations of the business for a period of time. The auditor will visit the place of business, usually for a number of hours or for a day or two, to observe the sales activity of the business. The auditor will then compute an estimate of the marijuana dispensary’s sales for a 3 year period, based entirely on the limited information obtained during the observation. If the test reveals an understatement of reported sales, the auditor will generally rely on the observation results as the basis for the calculation of a deficiency determination. Because observation tests are inherently flawed due to the limited scope of the review, and many auditors are not familiar with the proper procedures for performing the test, errors in the audit computation are common which can result in a significantly overstated tax liability. Auditors are typically reluctant to revise their findings after the test has been performed. When the auditor uses an observation test to establish an audit liability, it can create stress and dissatisfaction with the audit process for any business operator. In addition, the inaccurate audit findings typically lead to a prolonged appeal of the audit, which can last several years.

For these reasons, it is necessary to be actively involved in the audit process, and to make certain the auditor is using proper procedures in carrying out the review. For example, if the auditor requests that an observation test be performed, the test parameters should be established in advance, and in accordance with published guidelines. Further, the relevant factors that exist at the time the test is performed, that differ from the factors that existed for the (past) periods under audit, should be thoroughly addressed with the auditor in writing. One of the most obvious factors is an increase in sales over the course of the audit period. Auditors will often fail to account for an increase in sales and project an average sales figure to past periods that far exceed the actual amounts, thereby creating an overstated audit liability. Making certain that the auditor understands all of the relevant changes in the business operation is vital making sure proper adjustments are made in the audit computations. It is also advisable to have at least one alternative audit methodology performed, to determine if the results of the observation test are reasonable.

In summary, the methodologies used for auditing marijuana dispensaries are often different from the methods employed for other cash-based businesses. Being familiar with the audit techniques used by the auditor, and making certain that the techniques are performed properly and supported by appropriate reasonability tests, will help you or your client avoid difficulties in the audit process.