Are Tips Subject to Sales Tax in California? 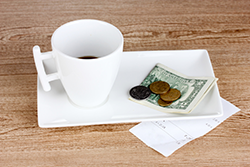 If you’re a restaurant owner that’s been through a California sales tax audit, you probably asked the auditor the above question at some point during the process. The answer you probably received was, “It depends,” or, “Sometimes.” If you’re lucky, you didn’t get further clarification in the form of an audit bill for tax on your employees’ tips.

The underlying principle is deceptively simple: if the amounts of your tips are optional (left up to the customers), and all of the tips are actually distributed to your employees, the tips are not taxable. If a tip charge is mandatory (required of the customer), or the employer is perceived to be retaining all or part of the tip, the amount will be regarded as part of the taxable selling price of the meal.

In reality, very few restaurant owners retain even a portion of their employees’ tips. Most owners regard tips as a supplement to their staff’s earnings rather than a means to increase the gross receipts of their businesses. Unfortunately, honest misunderstandings can result in auditors treating seemingly optional gratuities as mandatory and taxing them accordingly. In such cases the owners are forced to absorb the liabilities, since tax would not have been collected on the tips at the time of the sales because the owners sincerely believed the tips were optional.

Any amount that is automatically or unilaterally added by a restaurant to a customer’s bill will be presumed taxable as a mandatory gratuity or service charge. A tip amount or percentage that is negotiated in advance between the restaurant and the customer also will be regarded as mandatory. Charges will be considered mandatory if (a) customers are notified through statements on menus, ads or other printed media that a tip/ gratuity/ service charge may or will be added to their meal costs, and (b) the charge is then automatically added to their bills. The following (badly written) examples of such printed statements are quoted directly from the State Board of Equalization’s regulation 1603:

“A 15% voluntary gratuity will be added for parties of 8 or more.”

Note that the above statements would only establish the tip charges as mandatory if the restaurant staff also added the stated percentages to the bills automatically.

To overcome the presumption of taxability and demonstrate that your employees’ tips were optional, you’ll need to show that the gratuities were added by the customers at their sole discretion. The following are examples of documentation that will help overcome the taxability presumption:
(1) Guest checks presented to customers with the tip areas left blank, along with separate documents, such as credit card receipts, to which the cashiers added the tips.
(2) Guest checks plus evidence of payments showing that the actual tip percentages paid were different from the percentages stated on the menus or other printed media.

The Board of Equalization recently addressed some of the confusion surrounding this topic by amending the regulation covering tips, gratuities and service charges. The amended language, which goes into effect January 1, 2015 on a prospective (going forward) basis, provides that when restaurant owners report amounts designated as tip wages to the IRS on their employees’ forms W-2, those amounts will be presumed to be optional tips that are not subject to sales tax. Any tip amounts not reported as tip wages, or any amounts in excess of the reported amounts, will be subject to the usual mandatory versus optional verification process.

As a former restaurant owner, I understand how difficult it is to get employees to consistently report all of the tips they receive. Since you probably won’t achieve 100 percent compliance, you may not receive the full benefit of the new presumption. Therefore, you should still retain the kinds of documentary evidence described above to show that all of the tips received by your employees were optional.

In summary: an optional (nontaxable) tip is one that is solely determined by the customer, without restriction or compulsion. Avoid providing written statements about tips to your customers unless they’re clearly restricted to suggestions, and don’t make automatic additions of gratuities to your guest checks. Such practices might provide short-term gains to your servers, but they’ll come back to haunt you when the restaurant is audited. In the event your restaurant automatically adds a gratuity to its guest receipts, make sure the amount is included in the subtotal and taxed in the same manner as the other charges on the applicable receipts.

James graduated with honors with a Bachelor’s degree in Business Management with a concentration in accounting, and has completed the California Board of Equalization’s training program. James currently specializes in California and multi-state sales and use tax matters including, but not limited to the hospitality, medical, high-tech, eCommerce, and automobile industries. James is the founder and manager of McClellan Davis’ vehicle, vessel and aircraft exemption program. Email James